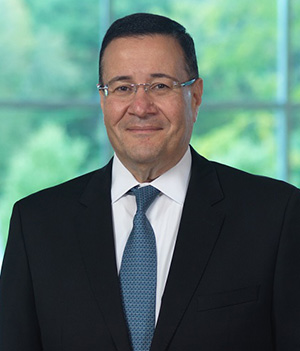 SPARTANBURG, S.C. – The Board of Directors of J M Smith Corporation has named A. Alan Turfe as the new CEO and Chairman of the Board, effective March 1, 2017, following the retirement of long-time Chairman and CEO William R. Cobb. Turfe was selected by the board following a nationwide search, and brings a wealth of experience in the life sciences, medical device, e-commerce and automotive industries.

“In a pool of incredibly qualified candidates, Alan demonstrated the leadership skills, business acumen and background best suited to lead J M Smith Corporation into the future,” said board member Terry Cash, who chaired the search committee. “Alan is growth-minded and believes, as we do, that the future is bright for J M Smith Corporation. We believe he will both honor the proud history of this organization while leading it through the dynamic times ahead.”

Turfe, a native of Michigan, began his career working his way through college on the second shift of an assembly line at General Motors (GM). Upon graduation with his MBA, he worked as a financial analyst for GM, moving up the ranks, first as European Finance Director for their Automotive Components Division and then as CFO, GM Worldwide Purchasing and Logistics, leading GM into e-commerce with a joint venture that generated more than $4 billion in shareholder value and resulted in him being appointed CO-CEO of the joint venture company.

Following a decade with GM, Turfe joined Fisher Scientific in successive leadership roles, including President of the Anatomical Pathology Group. He then joined IDEX Corporation where he served as President of Micropump, Inc. In these roles, Turfe oversaw sites in the U.S. and overseas, with full profit and loss responsibilities, growing these businesses through strategic acquisitions and new product development. Turfe joins J M Smith Corporation from Fresenius Medical Care, where he served as Senior Vice President and Chief Procurement Officer, leveraging global manufacturing and distribution in pharmaceuticals and other medical categories to expand margins and drive incremental profitably.

“J M Smith Corporation is a phenomenal organization with a proud history. I am looking forward to working with everyone within the company as we write its next chapters together,” said Turfe. “I believe in the importance of listening to employees and to customers on a personal level, asking ‘How can we help them achieve?’ and then working with them to do just that.”

“The Board was looking for a CEO who would continue the legacy of this organization as a leader in its markets, someone who has a record of market growth” stated Cash. “Alan is a proven leader with a multitude of experiences that are a great fit for J M Smith Corporation. He has demonstrated a talent for bringing people together with outstanding results. We are excited by what the future holds.”

Turfe is looking forward to being in Spartanburg and joining J M Smith Corporation. “One of the things that drew me to this opportunity is the longevity of both the employee and customer relationships. Long-term relationships such as these are evidence of the quality of the organization, the caliber of its people and of its service. I am proud to be part of that.” Turfe and his wife, Lenda, have two adult sons and are active in philanthropy.