November 13-19 marks U.S. Antibiotic Awareness Week: an annual week promoted by the Centers for Disease Control and Prevention (CDC) to raise awareness about antibiotic resistance and the importance of appropriate antibiotic prescribing and use. Each year, more than 2 million people in the U.S. become infected with bacteria that is resistant to antibiotics, and around 23,000 people die as a result of these infections. Antibiotics have been widely used to treat infections since the 1940s; however, since they have been around a long time and used with such frequency, infectious organisms have developed resistant mechanisms rendering them less effective.1

“Antibiotics are life-saving drugs, and if we continue down the road of inappropriate use we’ll lose the most powerful tool we have to fight life-threatening infections.” 2 – Dr. Tom Frieden, former CDC director

Antibiotic resistance also has a large economic impact that adds considerable cost to the U.S. healthcare system. Antibiotic-resistant infections are often associated with hospital admissions, extended duration of stays and costlier treatments. In a 2013 CDC report, estimates of direct healthcare costs associated with antibiotic-resistant infections were estimated to be as high as $20 billion a year, and indirect costs due to lost productivity were estimated to be in excess of $35 billion a year.3

Antibiotics are amongst the most commonly prescribed medications; however, around 50 percent of all antibiotics prescribed are inappropriate. Misuse of antibiotics can have negative impacts beyond the risk of resistance, such as adverse effects, toxicity and Clostridium Difficile infections.4

Appropriate Use and Stewardship

Most people associate Antimicrobial Stewardship Programs with the hospital setting, but it is estimated that 80-90 percent of antibiotic use occurs in the outpatient setting, of which 30 percent are of unnecessary use. Stewardship is designed to optimize clinical outcomes related to antibiotic use, limit adverse effects and toxicity, reduce healthcare costs and limit the selection for resistant organisms.5

Antibiotic stewardship garnered even more national attention in 2015 when President Obama released The National Action Plan for Combating Antibiotic-Resistant Bacteria: a plan that outlines goals and initiatives to fight against the growth of resistant bacteria. The plan incentivized pharmaceutical manufacturers to develop new antibiotics, included surveillance measures and set the goal to reduce inappropriate antibiotic use by 50 percent by 2020.6 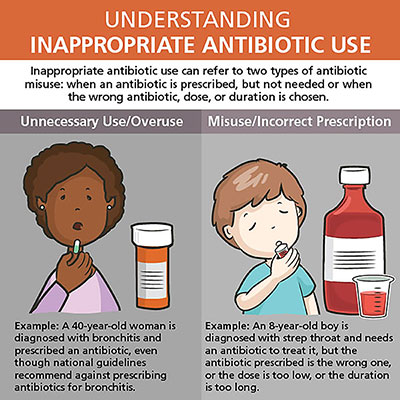 How Community Pharmacists Can Help

Where better to start with the prevention of antibiotic resistance than with the most accessible healthcare professional, the pharmacist. Community pharmacists can play a vital role in preventing antibiotic resistance by educating patients and caregivers about properly taking antibiotics and potential harms of antibiotic misuse. Patients often seek advice from pharmacists before making their doctor’s appointment; this presents an opportune time for the pharmacist to counsel the patient on the signs/symptoms that distinguish a bacterial infection from a viral infection. Pharmacists can provide guidance for symptom relief by making appropriate recommendations for over-the-counter drugs and home remedies for infections that do not require an antibiotic. Pharmacists can also promote vaccines to help prevent infections and use of antibiotics. Lastly, the pharmacist is most often the final healthcare provider to see a patient before an antibiotic is dispensed, presenting the last opportunity to verify the drug, dose, duration of therapy and proper indication.17,18