Policymakers in Washington, DC, are exploring reforms to lower drug costs that could mark the most significant changes in decades to how the federal government pays for drugs. After a long spell with no real progress, on May 11, the U.S. Department of Health & Human Services (HHS) unveiled the American Patients First Drug Pricing Blueprint (Blueprint) that includes over 50 different reform options.1 The Blueprint organizes policy reforms in four areas: 1.) Increasing competition, 2.) Better negotiation, 3.) Creating incentives for lower list prices, and 4.) Reducing out-of-pocket spending.

As part of this initiative, HHS issued a request for information (RFI) from stakeholders on how the agency could reshape drug policies to improve health outcomes and lower both out-of-pocket cost and total cost of care. HHS is interested in public comments about potential regulatory action to improve competition, support better negotiation of drug discounts through government insurance programs, create incentives for pharmaceutical companies to lower list prices, and reduce consumer out-of-pocket spending. Beyond specific policy areas, HHS is also requesting input on the general structure and function of the pharmaceutical market. The broad nature of the RFI presents an important opportunity for stakeholders to engage on these topics and inform the administration’s strategy moving forward. In particular, the administration’s proposals present a host of operational and political considerations that will impact stakeholders differently.

In addition to regulatory action from the Trump Administration, Congress is working through a series of legislative drug policy reforms as it tackles a comprehensive approach to confront the opioid epidemic. While it’s unclear if meaningful changes will come in 2018, both legislative and regulatory pathways are getting serious consideration to provide relief to patients on their drug costs.

The Blueprint comes on the heels of the president’s 2019 Budget proposal that included several proposed changes to lower drugs costs.2 The Blueprint describes areas where the administration may act, where stakeholder feedback may be solicited, and where the administration intends to work with Congress to pass legislation. While the Blueprint includes policy options and some additional details, it does not include specifics on how the policies would be operationalized or implemented. The Blueprint organizes nearly 50 policy options into two phases: “Immediate Action” and “Further Opportunities.” The reforms under “Immediate Action” are ones in which the administration believes it can implement via a regulatory process that do not require action from Congress. The “Further Opportunities” listed in the Blueprint are ones HHS is soliciting public input and would require changes in the law through legislation passed by Congress.

High-cost drugs under Medicare Part B receive considerable attention in the Blueprint, with a series of options designed to leverage better prices for the program that covers many of the most expensive drugs on the market. One proposed policy would consolidate and shift high-cost drugs currently covered under Part B into Part D where savings may be gained through increased price competition. This would have a significant impact on both Part B and Part D and would result in seismic shifts for Part D premiums, patient co-pays, and catastrophic drug coverage. Given the potential widespread impact the change would bring, the Blueprint calls for the development of a report on the implications of the reforms and whether lower prices on Part B drugs could be negotiated by Part D plans.

The Blueprint also calls for the revival of the Competitive Acquisition Program (CAP) for Part B drugs and biologics. The CAP ran from 2006-2008 as an alternative to the Part B “buy & bill” where physicians purchase medications and receive reimbursement from Medicare at 106% of Average Sales Price (ASP). Under the CAP, physicians can opt to have a CAP vendor supply Part B drugs for their patients. The CAP seeks to address two fundamental flaws with buy & bill. First, it removes the incentive physicians have to increase revenue by administering higher-cost drugs. Second, the CAP eliminates the inherent financial risk physicians take on by a buy & bill payment system that may reimburse them at a rate lower than their cost to acquire the drug. The CAP was suspended in 2009, but HHS is interested in starting it again and believes it could generate cost savings, suggesting that the CAP could be among the first policies from the Blueprint to be implemented.

The Blueprint includes reforms for the contentious issues of point-of-sale price concessions and manufacturer rebates. Rather than providing specific policy remedies in these areas, HHS is soliciting stakeholder comments on potential

policy approaches for applying manufacturer rebates and pharmacy price concessions to the price of a drug at the point-of-sale. One policy under consideration would require Part D sponsors to include in the negotiated price reported to the Centers for Medicare & Medicaid Services (CMS) a specified minimum percentage of the cost-weighted average of rebates for drugs in the same therapeutic category or class.

HHS believes disclosure of point-of-sale rebates would reduce patients’ out-of-pocket costs and decelerate their movement toward and through the Part D donut hole and catastrophic coverage phase. The Blueprint also includes a policy where all price concessions from pharmacies are reflected in the negotiated price that is made available at the point-of-sale and reported to HHS, even when such concessions are contingent upon performance by the pharmacy. CMS is not expected to finalize any policy in time for the 2019 plan year. 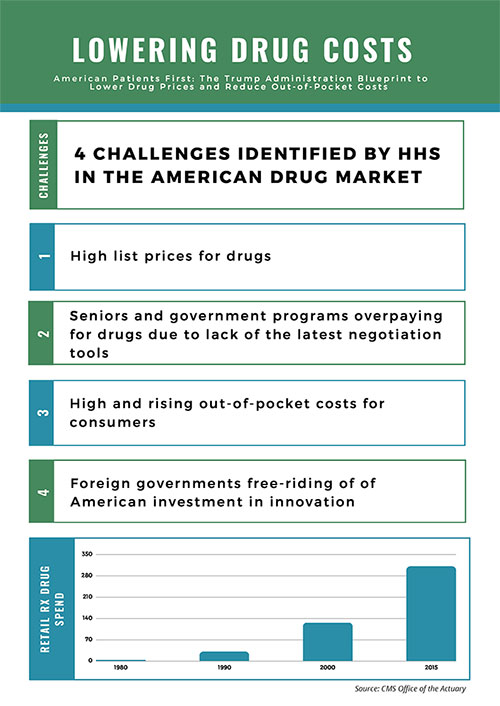 There are a number of bills pending in Congress to address drug costs and opioids. Soon after the release of the Blueprint, U.S. House members Doug Collins (R-GA) and Vicente Gonzalez (D-TX) introduced the Phair Pricing Act of 2018 (H.R. 5958) aimed at lowering the cost of prescription medications for patients in the Medicare Part D program. The legislation would require pharmacy-negotiated price concessions and pharmacy-incentive payments and adjustments to be included in negotiated prices at the point-of-sale. H.R. 5958 has gained some support in Congress and may advance this year as a stand-alone bill or be combined with other legislation.

Congress appears to be on track to pass a massive legislative package this year to combat the opioid epidemic. The sweeping reforms cover a wide range of the epidemic, from the supply chain through law enforcement and addiction recovery. These pharmacy-related provisions are likely to be included in the final package:

This legislative package builds on the Comprehensive Addiction and Recovery Act of 2016 (CARA) that, among many provisions, allows Medicare Part D prescription drug plans (PDPs) to establish a drug management program to lock in certain at-risk beneficiaries to a single pharmacy and prescriber. Under the policy that takes effect in January 2019, the lock-in does not apply to residents in LTC facilities or when a PDP learns during case management that a beneficiary resides in an assisted living facility that does dispense drugs through a contract with a single pharmacy. The lock-in exemption also applies if the beneficiary has elected to receive hospice care or has a cancer diagnosis.

The November 2018 election looms large over any effort for Congress to pass legislation to lower drug costs, so it is likely that any action this year will come from the regulatory arena. It is difficult to see Congress passing healthcare legislation for the remainder of the year, with the exception of an opioid package. HHS will collect public comments in response to the RFI in the summer and may advance regulatory reforms soon after. The Blueprint stops short of advancing specific remedies but clearly identifies a wide range of policy solutions that individually or collectively may achieve the desired result of lower drug costs. Stakeholders will be watching closely as HHS weighs its options, which include structural changes to manufacturer rebates and pharmacy price concessions.